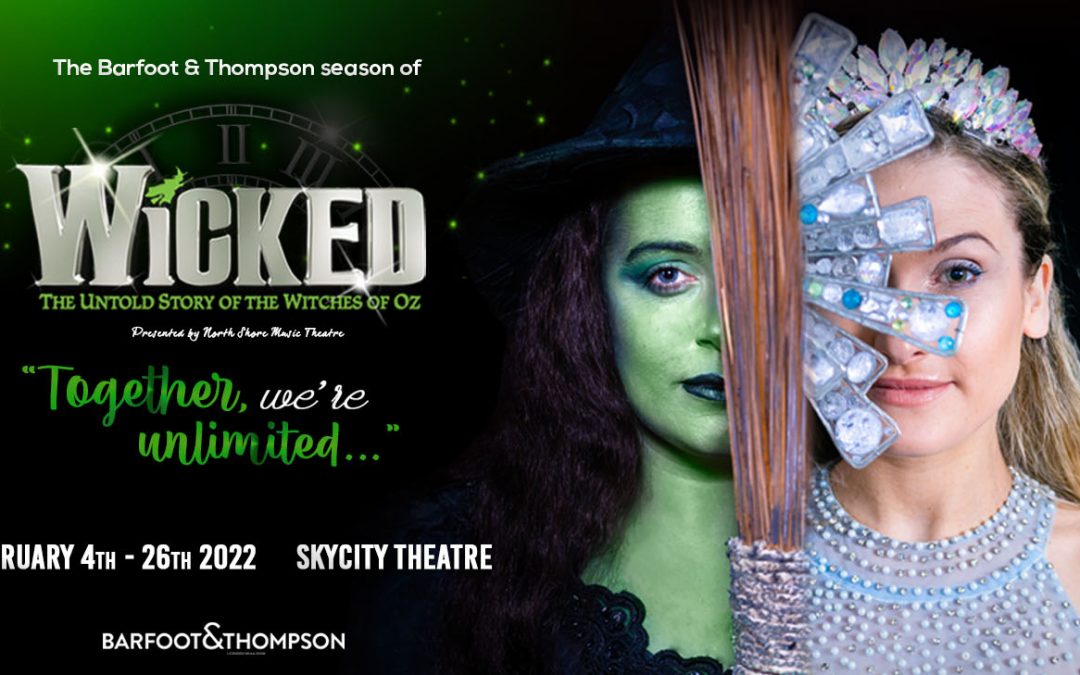 The latest lockdown has meant that The Barfoot & Thompson Season of Wicked at SkyCity Theatre has had to be postponed to February 2022. We look forward to still welcoming you to the most thrillifying production this side of the Emerald City!

Wicked is one of the longest-running musical on Broadway, and it will be staged at Auckland’s SkyCity Theatre for a limited season in February 2022.

“So much happened, before Dorothy dropped in…”

WICKED tells the incredible untold story of an unlikely but profound friendship between two girls who first meet as sorcery students at Shiz University: the blonde and very popular Glinda and a misunderstood green girl named Elphaba.

Following an encounter with The Wonderful Wizard of Oz, their friendship reaches a crossroads and their lives take very different paths. Glinda’s unflinching desire for popularity sees her seduced by power while Elphaba’s determination to remain true to herself, and to those around her, will have unexpected and shocking consequences for her future.

Their extraordinary adventures in Oz will ultimately see them fulfill their destinies as Glinda the Good and Elphaba – the Wicked Witch of the West.

The show features fantastical sets and spectacular costumes, and of the spell binding songs like “Defying Gravity” and “Popular” made famous by Idina Menzel, and Kristin Chenoweth in the original Broadway version.

This production will feature an all NZ cast, including Kiwi music royalty Tina Cross as ‘Madame Morrible’, this show will wow audiences young and old.

Don’t miss out on the most ‘swankified’ production this side of the Emerald City – coming to SkyCity Theatre for a limited season in February 2022.

North Shore Music Theatre is the lifeblood of the arts across New Zealand – and North Shore Music Theatre is the heart of community theatre on the North Shore. We’re passionate about providing outstanding entertainment, including substantial high-quality productions, performed by local talent. Now we’re proud to stage this world-class production in Auckland, providing our community with the opportunity to experience the magic of WICKED both on- and off-stage.

Please note that on the following matinee performances some roles will be performed by the understudy.

Tickets are flying out the door! Get yours before they’re gone!